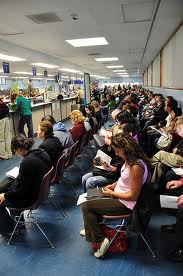 Going to the DMV ranks near the bottom of things people like to do. We wait until our license plates or our driver’s licenses are nearly expired before we drag ourselves down to the local office, expecting the experience to be both miserable and interminable.  Those fears, coupled with our general fear of the unknown, make a trip to the DMV something just slightly more fun than getting a root canal.

Such was my state of mind a few weeks ago as I approached our DMV branch office with the title to my new (old) car in hand.  The mission: to get the old Montana title converted to a new Nevada title.  Simple enough.

To maximize my opportunity for success, I planned to arrive at the local office at 7:15 a.m., a full 45 minutes before it opened. You can imagine my dismay when I pulled into the parking lot to discover that, if I hurried, I might be the 100th person in line!

A Sea of Humanity Flowing as One

The doors were flung open at 8:00 a.m. sharp!  Or at least I imagined they were since I was too far back in line to see the actual doors open.  The people streamed into the building and that’s when I received my first pleasant surprise.

At the door was a greeter and she was directing everyone to one of three different areas in the wide open, airy and well-lit building.  Some were directed to Licensing, some to Title & Registration, and the rest were pointed in the direction of “Additional Services.”

I took up my position in the Title & Registration line.  Waiting there, I had the opportunity to look around. There was plenty of seating, all setup in classroom fashion.  The building had a lot of natural light shining in from the large skylights inserted in the very high ceilings.  It was clean and though certainly institutional, it was nice institutional (if that’s possible)

I reached the front of the Title & Registration line where a man behind the counter asked me what I needed to do.  I explained my mission and he gave me a slip of paper with a number on it and directed me to the larger group of chairs, saying that my number would be called in order.  All of this was administered to efficiently and with a professional demeanor.

So professional, in fact, that I almost forgot to be suspicious of the “just wait over there and we’ll call your number shortly” part.  If I didn’t remain vigilant, these people just might make this experience enjoyable!

I sat and waited.  During my wait I determined that there were no less than 15 stations open and servicing people.  Suspended above us in several locations and in clear view was a reader board assigning numbers to stations.  And, to make sure I didn’t miss my opportunity, there was a constant announcement in a pleasant female voice reciting which number was now being served by which station.

It didn’t take long, not long at all, for my number to be called.  I approached the DMV representative seated at her desk and sat down.  She asked what I needed to do and I reiterated my mission.  She immediately turned to her computer, pulled up the appropriate form, and asked for my driver’s license.  Then, to my surprise, she completed the form for me!

Sitting there stunned, I didn’t hear her ask me how I would like to pay my fee – cash, check or credit card.  I came to as she asked again and blurted out credit card.  She slid the card swiper in my direction and I finished the transaction on my side. She printed a receipt and a copy of the new title application and told me that it generally takes three to five weeks to get the new title in the mail.

I wandered back out into the sunlit morning.  It was 8:35.  I’d spent more time in line waiting for the doors to open than I did accomplishing my mission!  Oh, and my title?  It arrived in under two weeks.

What They Did Right

As a student of process and efficiency, I had immediately begun taking notes on my experience as soon as I encountered the greeter at the front door. Here’s what they did right:

1. They understood their primary mission – to assist people with their licensing and vehicular needs – and everything was centered on that core objective.

2. They broke their services down into a simple customer-centric list of divisions – Licensing, Title & Registration, and Additional Services.

3. They took pains to understand the workflow of their business – parsing, queuing, paperwork – and incorporated human interaction steps and technological solutions to ensure smooth operation.

4. The building’s design and decor were well suited for its purposes and were actually “soothing,” such that the physical space accommodated the workflow.

5. The staff was professional and helpful – to the point of completing the forms for us.  (Note, this is also more efficient since they’re much more familiar with the forms than we are!)

Did Apple Take Lessons from the Nevada DMV?

In this instance we’re talking about a state department of motor vehicles.  Yet, by focusing on workflow and efficiency, and throwing in a mix of good design, the Nevada DMV took what has historically been a fear-inducing experience and made it an award winner.

When was the last time you looked at your business through your customer’s/client’s eyes?

2 thoughts on “DMV – The Model of Efficiency?”