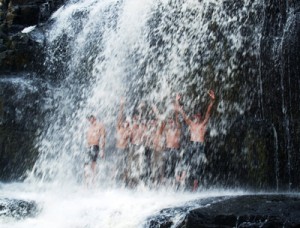 (Author’s Note: The following is a Cliff Note style summary of my keynote presentation and upcoming book titled The Waterfall Effect: Six Principles for Productive Leadership.)

Time is every organization’s most valuable asset.  Yet it is a non-renewable resource; once gone it cannot be recaptured.  Thus, leaders must leverage their time to remain productive.

The Benefits of Leveraging Leadership Time

Leaders who focus on the right objectives, people and activities are leveraging their time.  The result is called the Waterfall Effect – the cascading benefit that flows down through the organization and out to clients and customers.

How can leaders best leverage their time in today’s always-on, frenetic world? How can they ensure that they’re making the best use of this precious, non-renewable resource to deliver the most productive leadership possible? How can today’s leaders reproduce the Waterfall Effect over and over?

1. Developing Field Vision.  Leaders must focus on assimilating and responding to today’s dynamic work environments to remain in command of their organizations.  Here are some ways to accomplish this result.

2. Keeping the Glass Half Full.  How people feel directly affects how they perform.  Keeping the team’s attitude positive requires effort on the leader’s part.  These suggestions will help.

3. Leveraging The Value of Silence.  Leaders are regularly guiding others and are often looked to for direction.  So much so that they often forget the benefits that accrue from being quiet.  When working in groups be mindful of the following tenants.

4. Peeling Back the Onion.  There is hidden potential in everyone.  Uncovering it is more than a leader’s obligation, it’s a leader’s reward.  There are several mechanisms for mining the potential in others.

5. Setting the Bar.  Given the current speed of interaction, setting and managing expectations has never been more important to individual or group success.  These are the guideposts to facilitate this result.

6. Triaging Priorities. The modern working environment can be likened to a medical emergency room where constant triaging must be done to ensure the best outcome.  When the day gets hectic leaders are encouraged to remember these principles.

Today’s world is demanding. That means today’s leaders need some simple tools to lead productively.  The six principles listed above, along with their corresponding implementation suggestions, will help you and your people produce the cascading of benefit promised by The Waterfall Effect.