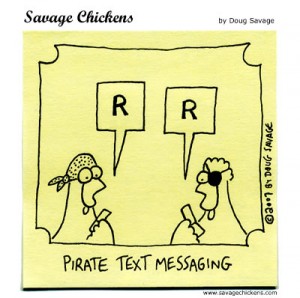 Face it.  Texting is here to stay. Love it or hate it, it’s just another chapter in the long history of faster, more mobile communication technologies that started with messengers running across the Greek mountains between rulers.  Whether we’re using the “old school” flip-phone style of texting or the update-to-date smartphone with its virtual keyboard, nearly everyone is texting, at least to a very small group of people.  In fact, the only people I know who aren’t are my parents.  That’s because my Mom can’t stay focused long enough on the “how” to make it happen!

It occurred to me while deplaning the other day and watching everyone check their messages – text and voice – that if done properly, texting can actually improve how well we communicate with each other.  The reasons lie in the technology’s (perceived) limits of 140-160 characters and in the nature of short-burst opportunities occasioned by its mobility.

Texting took hold first among young people, the group who often adopts new technologies most readily.  It got a bad rap early on because kids don’t really have much to talk about.  Seriously:

What are you doing?

isn’t earth-shatteringly important.  Moreover, the “kids” created their own lexicon of abbreviations – OMG, BTW, IMHO, etc. – which added to the perception that texting is for the young and idle … and maybe the addled.  (Note, many of these “phrases” will likely be added to the formal lexicon in the future.  Before you going raging at me, remember that words like “isn’t” and “doesn’t” were also considered objectionable when they first appeared.)

A related vector for this technology is its inherent mobility.  Again, when mobile, kids are rarely responsible for the mode of transportation.  Whether they are in a car, a bus, or a train, they are free to text at will.  So, again, their adoption was faster.  Now that we “adults” have largely taken to texting, all the necessary rules and legislation are being passed to keep idiots from doing idiotic things like texting and driving.  (If you think you can do it safely, try this test hosted by the venerable NYT – http://ow.ly/1qjKw.)

Making the Best of It

Stepping away from its origins and looking afresh at texting, there are several things about it that can improve our ability to communicate with each other, provided we make the effort.  Here are some thoughts:

There are many other ways to make the best of texting and its brethren, but in the interests of brevity, I will stop here.