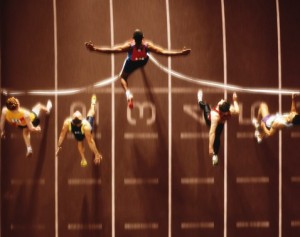 I achieved a milestone this week that I never thought would happen.  The only reason it did occur was because I took the advice of a number of people who have inspired me both recently and over the longer term.  Yes, I’m going to name names, and then I’m going to tell you what was achieved and, more importantly, what I’ve learned from the experience.  First, to the list of people who immediately come to mind as people who inspired me to embark on this particular effort:

Leo Babauta, creator of Zen Habits, who focuses on the very simple (and clear) ways to get things done.

Michael Perry, author of several books, Population 485 among them, who focuses on the very precise things that matter.

Ken Ammann, my best friend for 25 years, John Trujillo, my business partner and intrepid adventurer, and Tom Nitopi, my unwitting mentor and close friend, who all only know one direction – forward.

There are numerous other people, events and things that have influenced my success in achieving my objective, but the people listed above provided particular inspiration for this effort.

That’s what the scale said this Monday morning, April 18, 2011, Tax Day, when I climbed on it to weigh myself.  I’d reached my goal – to drop below 150 pounds.  At 149 pounds, I have lost 31 pounds since I started trying to lose weight some months back.  Here’s the post I wrote that describes the details of what I’ve learned in the process, so I won’t re-hash old subject matter. However, the one thing I will relate is a deep sense of satisfaction with both my inner and outer self.

Yes, all my clothes are too big.   And yes, I have to learn to keep the weight off, which is why I’m just going to keep the clothes I have for now and buy a belt.

More importantly, though, is the tactile and emotional confirmation that I could reach the 150 mark again after years of allowing myself to believe that I was “stockier” than my younger brother and that “everyone adds pounds” as they get older.  The simple truth is this – It’s all bullshit.  The only real barriers to achieving goals like I have are a persistence of commitment and an honesty of self.  The rest is just execution, which ain’t as hard as most would like you to believe. 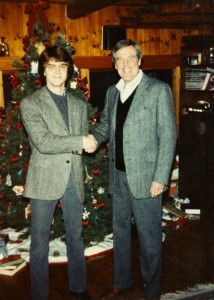 That’s how long it’s been since I weighed less than 150 pounds. When I graduated from high school over 30 years ago, I weighed approximately 145 pounds.  I’d just finished lettering on the varsity track team and headed off to the rest of my life.

Within months of reaching college, I had politely declined the track coach’s offer to run for the college team, joined a fraternity and proceeded to party until well after the cows came home.

As I rounded the corner of my final year in law school seven years later, I had “grown” to about 190 pounds.  The odd thing was that I didn’t look heavy.  I had filled out, but I carried the weight reasonably well.

Once I entered the real world of work, I got back into exercising regularly, which dropped me down to 175 pounds or so.   That’s the weight I hovered around for the next twenty-some years, bobbing up to the low 180s occasionally and down to the low 170s when the stars aligned correctly.  That weight range is what I considered a normal adult weight for an average American white guy in his 30s, then his 40s.

That’s when I started this little weight loss experiment using a new tool a client told me about – MyFitnessPal.  For years I would look at my brother, who’s four year’s my junior, and ask myself whether I could be as thin and fit as he was.  The answer that echoed in my brain was always, “No.  He’s more like Grandpa and you’re more like Dad.  Besides, he’s way more active than you are.”

Then one day I had lunch with a client who had visibly dropped a huge amount of weight – 85 pounds!  He told me about the app, which I promptly forgot about.  A year later, this last fall (of 2010), I saw him at a conference and he still looked pretty good.  He confessed to having added back about 10 pounds, but the other 75 had remained off.

That little fact stewed in my brain along with the questions about what was possible if I really tried.  Just before Thanksgiving of last year (2010), I downloaded the app to my iPhone and began fiddling with it.  Without going into the details, let me just say that it’s brilliant in the way it looks things up (using the internet) and gives you credit for the cardiovascular exercises you do (like golf!).

Within the first 90 days, I had reached my initial goal of weighing 165 pounds – down 15 from my starting point.  By then, using the app and being conscious of what I was eating (nothing really “different” just more conscious of “how much”) was a habit.  So much of a habit that I set a Big Ass Goal of getting below 150 pounds for the first time since high school!

That effort took another three months, but here I am today, baggy pants and all.

In the beginning, I had this vague Big Focus idea – the vision of myself at 150 pounds.  However, I didn’t have the Little Focus part – the constant effort required to achieve that Big Ass Goal. Once I got started down the path and maintained a persistence of vision, along with a strong dose of daily self honesty, the results started to show.  Over the course of 6 months I dropped 31 pounds and achieved a weight of 149 – a number I haven’t seen on a scale in over 30 years.

Much of the credit for achieving this goal goes to me.  Hell, I’m the one that had to do the time, so to speak.  However, I will also say that the work of Leo Babauta, Michael Perry, and mi tres amigos – Ken Ammann, John Trujillo and Tom Nitopi, were instrumental in providing me guidance and examples of excellence to which I could aspire.