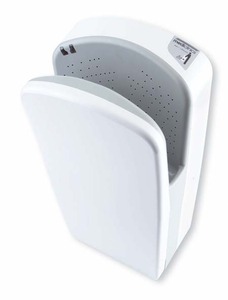 Normally, I talk about being more productive during the day.  The premise is that you’ll enjoy your day and your career more when you’re more in command of your workload. Well, today ain’t gonna be a normal day.

I travel a lot – two to three times a month – giving presentations and seminars. As a result, I’m constantly in and out of airports. Now, there are many entertaining works on traveling and airports – for example  Dear American Airlines and Up In the Air – which I commend to you.

This piece focuses on a new aspect of travel that I find particularly irksome – the signage on electric hand dryers in airport restrooms imploring us to save trees by using the electric device instead of paper towels. Every time I see one of these, I want to take a sledge hammer to the electric hand dryer and swing for the fence!

Separating the Truth from the Marketing Speak

The stated benefit of electric hand dryers is that they reduce our use of paper products, which come from trees and fill up landfills. Simple enough, right? Truthful too, on it’s face. But let’s dig just below the surface to see if there’s a real benefit here or only a perceived one.

The Facts about Paper Towels.  We know that paper towels are paper products and that paper products come from trees. What we tend to forget is that trees are a renewable resource. When a tree is cut down, a new one can grow in it’s place.  It may take some time, but both public and private efforts to farm trees are long-standing mature endeavors.  Check out How Trees Are Grown For Paper to learn more about tree farming.

Second, while it’s true that paper towels fill up landfills, it’s also true that paper is highly biodegradable.  It breaks down quickly – in about two to four weeks – returning nutrients to the soil to feed new growth.

So, the verdict on paper towels is that they come from a renewable resource that is biodegradable.  There is definitely a cost, but it fits relatively well into the bigger ecological picture.

That’s a problem on just about every level imaginable, including the depletion of fossil fuels and the pollution that results from their extraction and generation. Fossil fuels take thousands, even tens of thousands, of years to create.  They are not renewable in any reasonable sense of the word.

But the more egregious foul comes from those little signs in airport lavatories.  They lead us to believe that we’re “doing our part” by drying your hands differently.  The truth is that we’re not “doing our part” at all.  Instead of doing good, we’re doing harm by using technology powered by fossil fuels!

No doubt you’re asking yourself why? Why are those signs put on the hand dryers?  The answer is simple enough.  It costs more to purchase the paper towels, store them until needed, load them into dispensers, and haul away the used ones than it does to mount an electric hand dryer on the wall and plug it in.

Don’t get me wrong here.  I’m fine with capitalism.  I’m also fine with organizations finding ways to reduce costs.  It’s the misleading marketing that sticks in my craw.  Note, I’m not pointing the finger at “them.”  What I’m pointing out is that we can each make a choice about what we do about the misleading information being presented to us.

To dry with paper towel or not?  That is the question.  The answer needs only to align with your sensibilities.

There are several lessons to be learned here.

Oh, And about the Hygienic Thing

Many of you will point out that using electric hand dryers is more hygienic.  There’s an entire article in the subject of modern American germaphobia, but here are several thoughts to consider.