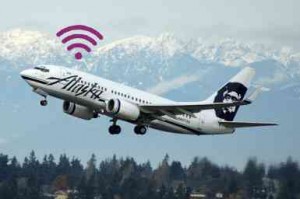 I’m on my way to Boston to speak at a CEO breakfast.  According to the captain, we’re cruising at 34,000 feet – over six miles up.  And the most amazing part is that I’m connected to the office, friends and family via the Gogo Inflight wi-fi system now available on most airline flights.

Like all new technologies, many people recoil from the notion of being connected while flying.  “Just another sanctuary compromised” is the opinion of these nay-sayers.  I’m confident that their ancestors scoffed at those odd looking jalopies sporting internal combustion engines some 100 years ago.  Now, before everyone rushes to the Comment section to lambast me with rebuttals to what may appear to be a technology-hugging predisposition, let me point out two things:

That said, there is some new neurological science and some great common sense that supports the idea of working while in-flight

What the Science Says

Much is made of the ‘aha’ moment.  Those bursts of brilliant insight that occur infrequently in our lives delivering new answers to vexing problems.  In a article in the February, 2011, issue of T & D (aka Training and Development) Magazine, David Rock summarizes some fascinating information about the study of these lightning strike ideas.  The upshot of Mr. Rock’s article is that these leaps occur when our brain activity is relative low – a counter-intuitive finding to say the least.  Specially, studies have found that the factors that tend to produce insights include:

Applying these factors to in-flight work efforts, we can see that the environment is relatively quiet – devoid of interruption and distraction.  Many frequent fliers today sport noise cancelling headphones which promote the notion of inward looking and, because we’re essentially just hanging out throughout the flight, we’re generally in a pretty good mood.  Finally, we can choose to not be “effortful” during this portion of our day.  If we turn our attention to easy work tasks we just might solve that giant conundrum presented to us at the last meeting before we headed to the aiport.

Proof in the Pudding

It’s ironic (destiny?) that I read Mr. Rock’s article just before boarding this flight because I actually experienced exactly what he describes on a flight from Las Vegas to Portland a couple of months ago.  And that ephipany produced the presentation that I’m flying to Boston today to give!

The shortish story is that I had committed to giving  this presentation in January.  Moreover, it was a new presentation that I had only conceptualized with some notes on paper.  But on the trip to Portland, I pulled out a yellow pad and just started sketching out slides of the talk.  I had my Bose headphones on listening to some piano music and knew that my world was settled for the next two hours right there on the plane.

Moving through the early part of the presentation, I began to see a path and a series of messages I wanted to communicate to my audience.  Over the next hour, I completely fleshed out the presentation on paper (for delivery to my graphic designer) and felt very confident in the messaging, as well as my comfort with the material.  Since that time, the presentation has really tightened up nicely and this is the first time in years that my preparation has been smooth.  I attribute this result to the insights that occurred during that in-flight sketch session.

But What About the Common Sense Part?

There’s just one overarching common sense reason to use in-flight time to get work done.  Simply stated, the work’s got to get done anyway and you’re sitting on this plane for X hours. It’s either now or when you get back home.  Frankly, I’ve always got lots to do, so converting this down time into productive time means that when I get home, I don’t feel compelled to check my e-mail or to work late the following evening  to “catch up from being gone.”

Hey, it’s your life and your time.  I’m just suggesting a way to make the best use of it.